In our world there is a silver lining to anything that reduces global – energy and resource hungry – busyness, like the COVID-19 pandemic.

The good news (via Carbonbrief.org):

As China battles one of the most serious virus epidemics of the century, the impacts on the country’s energy demand and emissions are only beginning to be felt. Electricity demand and industrial output remain far below their usual levels across a range of indicators, many of which are at their lowest two-week average in several years. These include:

All told, the measures to contain coronavirus have resulted in reductions of 15% to 40% in output across key industrial sectors. This is likely to have wiped out a quarter or more of the country’s CO2 emissions over the past four weeks, the period when activity would normally have resumed after the Chinese new-year holiday. (See methodology below.) Over the same period in 2019, China released around 800m tonnes of CO2 (MtCO2), meaning the virus could have cut global emissions by 200MtCO2 to date.

The key question is whether the impacts are sustained, or if they will be offset – or even reversed – by the government response to the crisis.

Initial analysis from the International Energy Agency (IEA) and Organization of the Petroleum Exporting Countries (OPEC) suggests the repercussions of the outbreak could shave up to half a percent off global oil demand in January-September this year.

However, the Chinese government’s coming stimulus measures in response to the disruption could outweigh these shorter-term impacts on energy and emissions, as it did after the global financial crisis and the 2015 domestic economic downturn.

Governments now have a unique chance to switch to a new understanding of economics, i.e regenerative management of resources and waste, that is compatible with human life on this planet – or otherwise to ignore the opportunity and lapse back into suicidal busyness as usual.

Our society could benefit a lot from a permanent cultural shift towards reduced commutes into city centres, from reduced global travel, and from increased levels of remote knowledge work. A pandemic might turn out to be an effective catalyst on multiple levels:

“Don’t try and predict, just think about preparation from your business side, I know we’re doing this at the Reserve Bank. Folks, liquidity is probably going to help, so talk to your bankers and make sure they don’t start sucking that away from you. And bankers, be long-term and be hard thinking about this sort of stuff. These events are always going to happen, it’s just this year’s activity and, who knows, it’s probably not the only one this year. So all businesses should always have that preparation. The Reserve Bank is also doing a lot of mahi in the background around what low or negative interest rates would mean for the New Zealand economy. Can banks do a negative number if it was a small negative interest rate? Now, all of this is preparation, it’s not a prediction.”

Ideas that are genuinely beneficial for society and the planet are best propagated by the slow and valuable process of knowledge sharing at eye level in Open Space, allowing for critical enquiry, independent validation, refinement where needed, and transmission of essential locally relevant context.

We can’t engineer a society through memetics the way a biologist might hope to engineer an organism through genetics. To do so would bypass our higher faculties, our reasoning, and our collective autonomy. It is unethical, and, in the long run, ineffective. It’s also deliberately antihuman.

Sure, well-meaning and prosocial counterculture groups have attempted to spread their messages through the equivalents of viral media. They subvert the original meanings of corporate logos, leveraging the tremendous spending power of an institution against itself with a single clever twist. With the advent of a new, highly interactive media landscape, internet viruses seemed like a great way to get people talking about unresolved issues. If the meme provokes a response, this logic argues, then it’s something that has to be brought to the surface.

– From The ends never justify the memes by Douglas Rushkoff

Using tools of persuasion beyond peer-to-peer learning may well become a taboo in the not-too-distant future. Capitalists are starting to trip over their own competitive games, desperate for new ways of remaining relevant in a post-capitalist world. The level of fear is illustrated by this headline: Data is not the new oil – it’s the new plutonium.

The vast majority of online social communication tools have been designed to support and promote the propagation of beliefs via the rapid process of influence rather than via the much slower process of evidence based learning and education. We live in a society driven by fear. Always ask who benefits from the fear. Fear can induce panic but it can also catalyse courage.

The cycle of fear can only be broken by the creation and replication of islands of psychological safety. Encouragingly the number of such islands is growing. 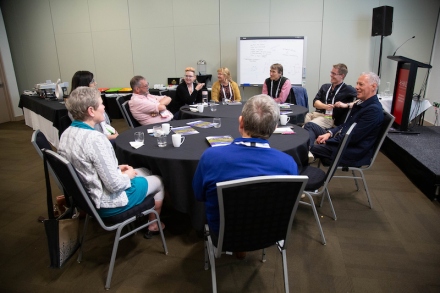 Even though I mention the concept of human scale in many of my articles, I have my doubts about how many readers take the time to think through the full implications of living in super-human scale societies.

My hope is that the COVID-19 pandemic triggers a shift in awareness and sensitivity to the extreme risks generated by our attempts to operate super-human scale institutions and systems using organisational designs that provide a small minority of individuals with enormous social powers – often orders of magnitudes beyond individual human cognitive limits, severely constraining the individual agency of the vast majority of people – thereby reducing our collective intelligence correspondingly by orders of magnitude.

“Study after study confirms that most people have about five intimate friends, 15 close friends, 50 general friends and 150 acquaintances. This threshold is imposed by brain size and chemistry, as well as the time it takes to maintain meaningful relationships”, Robin Dunbar says.  – Scientific American, September 2018

These numbers guide my thinking on human scale and have shaped the NeurodiVenture operating model that limits the size of good company to 50 people, which in the case of S23M is enforced by our company constitution. The NeurodiVenture model is closely aligned with observations made by E. F. Schumacher in his 1966 essay on Buddhist economics and his book Small is Beautiful.

Larger organisations that contain structures of command and control are not only learning disabled, they are also also detrimental to mental health and trusted collaboration.

Here are some of the advantages that emerge at human scale:

I could compile a much longer list of advantages of the NeurodiVenture operating model supported by 8 years (and counting) of operating experience, but many of these advantages are simply corollaries of the cognitive limits highlighted by Dunbar’s research.

Agency at super-human scale is an emergent phenomenon that can not be attributed to any specific individual. Living within “civilisation” we are surrounded by super-human scale structures and it is difficult for most people to imagine collaboration at human scale without being embedded in some bigger hierarchical system.

If we want to avoid repeating the mistakes of human “civilisations”, the rules for coordinating at super-human scale will have to allow for and encourage a rich diversity of human scale organisations. In a human scale social world, apart from the self-imposed constraint of human scale, there is no universally dominant organisational paradigm.

The resulting web of interdependencies can simply be thought of as the web of life rather than “civilisation 2.0”. We must not to again make the anthropocentric mistake of putting humans at the centre of the universe.

The following two articles offer further observations on the co-ordination of activities at super-human scale:

Human capabilities and limitations are under the spot light. How long will it take for human minds to shift gears, away from the power politics and hierarchically organised societies that still reflect the cultural norms of our primate cousins, and from myopic human-centric economics, towards planetary economics that recognise the interconnectedness of life across space and time?

The future of democratic governance could be one where people vote for human understandable open source legislation that is directly executable by open source software systems. Corporate and government politicians will no longer be deemed as an essential part of human society. Instead, any concentration of power in human hands is likely to be recognised as an unacceptable risk to the welfare of society and the health of the planet.

Language frames people’s thoughts and emotional response. The best we can do is to consciously use language that broadens our perspective to include all living agents within the biosphere.

We can reorient towards a kinder world that celebrates interdependence by systematically replacing words that have accumulated toxic cultural baggage: